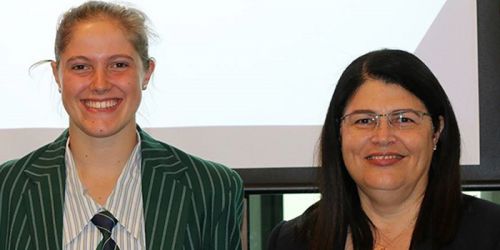 Liezel Viljoen is congratulated by the Honourable Grace Grace, Minister for Education and Minister for Industrial Relations.

The program was an extension of the highly successful QRC/WIMARQ Women’s Mentoring program, which has also been supported by the government since its inception in 2014.

All of the participants in the program said the program was beneficial to their development and exploration of careers, particularly non-traditional careers in the resources sector.

For Liezel, it has been literally life changing.

“The program has opened up doors allowing me to follow my dream to become a mining engineer by securing a 4-year scholarship with Glencore Coal to study at the University of Queensland,” she said.

“During the 6-month program I learned time management skills to balance school, sport, family, friends and time for myself. I am so grateful to have gained a once in a life opportunity to meet the future of the resources sector and gain an insight into the roles and responsibilities of each field.

“I was in my element when the mentors, mentees and guest were networking. It was an incredible feeling being in a room full of people who have a passion for the resources sector in one way or another.

The 6 months flew by and I received multiple comments on how I have matured as a person. I can only thank the Girls Mentoring Program for allowing me the opportunity to be mentored and inspired by many other people in the resources sector.

“The QRC/WIMARQ Girls Mentoring Program was a huge success for myself and the other 19 mentees. Throughout the mentoring program I learned the importance of networking and how it does not only have to be beneficial for yourself, but it can be an opportunity to connect other people in the future.

“I had the honour to meet the future of the resources sector: female engineers, geologist, chemical engineers, diesel fitters and the men and women who have excelled in their chosen career. I would not be the woman I am without the support I have received from my family, mentors and close friends.

“I am confidently going into my Bachelor of Mining Engineering Degree because I have been shown it is possible to be successful by so many inspiring young females and my mentor has also been helping me every step of the way.”

The program will continue in 2020 and beyond, with the continued support of QRC member companies. It is open to girls enrolled in year 12 in Queensland Minerals and Energy Academy (QMEA) schools, part of the Queensland Government’s Gateway to Industry Program. The QMEA engages with 75 schools across Queensland.